As per the Latest news the Popular Mobile messaging service WhatsApp touches the 70 million monthly active Users in India. Its hard to say that you are unaware of the WhatsApp. Instant Messaging service WhatsApp bought by the Facebook earlier this year and it crosses the limit on active Indian users. WhatsApp Now India became biggest market for the WhatsApp. 70 Mns active users is 10th of its Globle users. WhatsApp not Using any Advertising to make money because its goal is to provide distinct services. Company earning by the small subscription fee every year when user renew the service. The policy might goes changed after Facebook Bought the WhatsApp in $19 Billion this year. 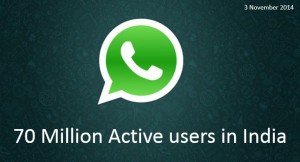 We have 70 million active-users here who use the application at least once a month,” Arora, a vice-president with WhatsApp, said at the fifth annual INK Conference here.

Arora also said that the Company’s aim is to connecting billions of users from the biggest market like India and Brazil.

Arora said, Company motto is to adding more interesting features in the Application and continue to hold the distinct identity even its takeover by Facebook and will not get connected with the social networking site.

India is the Biggest market for WhatsApp as most of the People connected to each other at every move. They are die hard fan of it. After takeover by Facebook its users rapidly increases and Company continued to giving more advanced features for free to the users without thinking at business aspects.

WhatsApp is the Most famous among the users compared to other messaging applications like Wechat, Hangout, line etc. and user-base has reached to 600 million from the 30 million.