Teen Patti is the Game developed by the Octro Inc. which is the popular and most played game world wide, Octro Teen Patti alternatively also known as the Indian poker. Octro Teen patti reserved the high position in the Top Grossing Android game list. Teen Patti is the multilayer card game played online and most played in the India. It is the game in which players raises the chips based on the cards they gets. After all its all depends on luck to get the big hands. People sits on the table and also do the public and private chats internally. Players assigned the tables according to the number of chips they have and people can also follow their friends to play on each others table.

Octro Made the super addictive game Teen Patti with smoother and lightweight gaming experience in all Android devices. Everyone gets the 10,000 Free Chips on game download. Each player gets the free Bonus everyday and to get the chips as a bonus one should come online by starting the Application. Card game adds more fun and excitement because it is played with real Facebook friends and they can chat internally while playing the game. 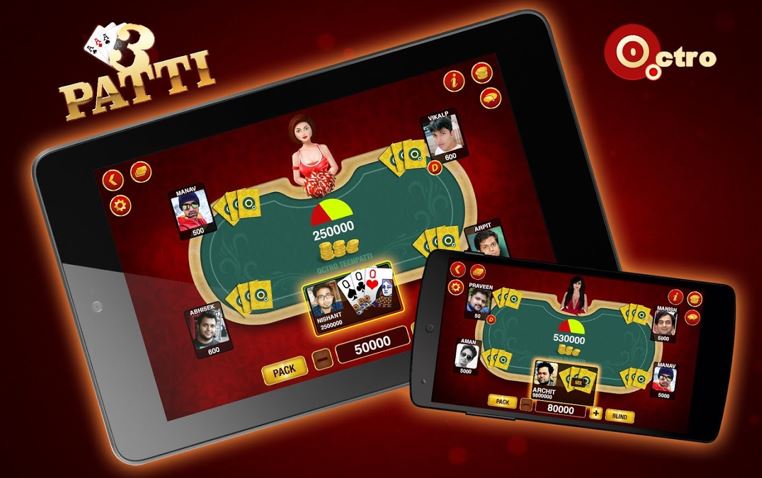 I personally played the Game Teen Patti and fall in love with it badly and i found many peoples (Indians) around me who plays the Octro Teen Patti Day and Night and drains the Android Mobile battery all the day. People who are badly addicted with the Game always keep concentrate on their chips and planning to make huge chips bucks but sometimes they fails due to blind raise. I have seen few peoples around me who carries multiple phones so they can play Teen patti in Another Mobile while one drains out the Battery.

The Teen Patti Game gone viral now a days because people turn the Game into the Real business. They do Buy/Sell the chips after reaching the desired milestone. Day and night they passing hours to earn a handsome money and when they found the person who is really addicted and want to buy the Chips for real money, they sell it. Many people making the monthly huge income by playing just game. The people who have mastered the game are earning well and selling the chips for real money. Many people bought new Smartphone by just selling the Teen patti chips. So you can predict the level of Addiction people do have now a days. Buyers are always ready to get chips by giving the real money because once they reach in the higher level table in the Game, they can’t find themselves comfortable in the Small table with low raises.

Irrelevant of People making money out of the Teen Patti Game or not but the Octro Inc. is in the Top Grossing list of the year. Along with Octro Teen Patti, Clash of Clans and Candy Crush Saga is on the Top Grossing List on the Play store. Octro also developed the Super addictive game including the Indian Rummy, Tambola – Indian Bingo, Octro also have the communication app named OctroTalk.