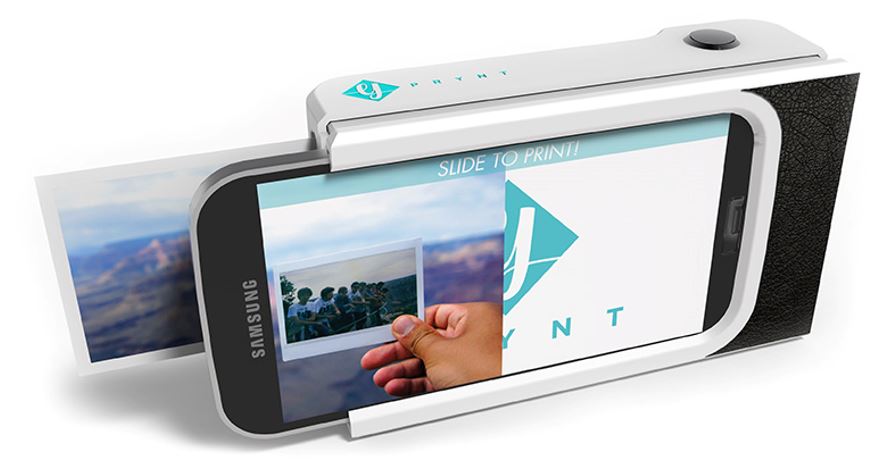 Prynt, French start-up presented the Smartphone case with built-in Printer. This Print case stay attached with the smartphone and which let you allows to take the print of the photograph on the move. The device is tested and presented by the Prynt CEO Clement Perrot. Now its easy to get hard copy of selfies or any photo from Facebook, Instagram or any photo inside your Smartphone. Just send that image to the printer and you’ll get hard copy of the photo in less than a minute.

It is connected to smartphone via Bluetooth and Printer produces the image in hard copy and currently it takes around 50 seconds. But the CEO said case will soon be printing pictures in 30 seconds and they are working hard to get more closer. Prynt case final product will have feature that make your photo movable which looks like video clip.

The CEO Perrot also unveiled that it has cool feature called augmented reality. which record the video before and after photo shot and store it to the cloud and when that hard copy photo placed against the camera It’ll become the video and you can see the moving characters in the photo. Isn’t it the cool? Currently only one sheet of paper can fit inside the case but it’ll hold upto 30 pieces very soon – Prynt CEO Clement Perrot said.
You can see the working of this Polaroid smartphone case in the video Embedded below.

Prynt started developing the product in January and ready to launch the product in the beginning of the 2015. It’ll cost $99. Currently case developed for the four inch screen mobile smartphones but in future they plans to make case for the larger wider screen devices like Samsung Galaxy Note and iPhone 6 plus.

If you want to get notified when the Official product available in 2015, then just go to the Official Prynt Website and Subscribe to get updates.