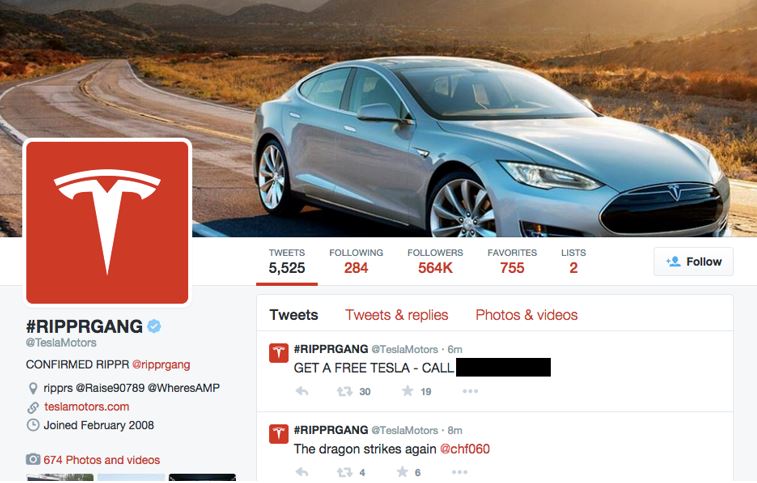 Tesla Motors, American company that design, manufacture and sell the electric car faced the security issue in its Twitter account and Website itself. Owners lose the control and Tesla CEO Elon Musk’s Personal twitter account was also been hacked meanwhile. On Saturday 1:52 PM its all happened and for several hours its been down and Hackers defaced the account and on Twitter handle @TeslaMotors they changed the Account name from “Tesla Motors” to “#RIPPRGANG” and also quoted the line as CONFIRMED RIPPR @ripprgang and located it as ripprs @Raise90789 @WheresAMP

Hackers also added few tweets in it. Tweet offers the Free Tesla by calling the mentioned number. Hackers twitted “GET A FREE TESLA – Call __” HE mentioned the Number along with it. By tracking the number its been confirmed that the number belongs to computer repair shop in Illinois and its been twitted to flood the number owner with calls.

Again Its been confirmed that the Tesla’s website been compromised by the same hacker gang by 2:15 p.m. For the several times its been returned to the same hijacked page even after putting it offline. Now all the control is in Tesla Company’s hand and everything is been restored back to normal 🙂

Still its been unclear if its the loophole in Tesla;s own server or is the result of the  DNS redirection issue. But one thing is clear that its hard to trace back such type of Master mind hackers. Few days back Google Faced the Same issue in Malaysia server, Hackers denied Google Malaysia access and putted own banner. Happily there is no business affection to Tesla motors as everything been restored to normal stats.