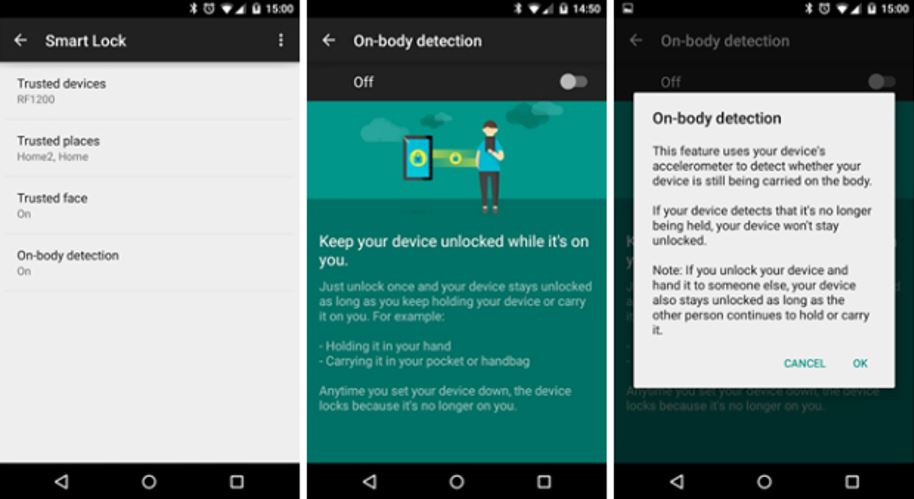 Google Android keep upgrading its latest version to improve the user experience for various smartphone devices which carries the Android Lollipop version. Previously Google Added the Android security feature by allowing the encryption of Android 5.0 Lollipop to secure your phone data. Google also rolled out the Android Lollipop 5.0 smart lock feature to make the pair to the device and let it allows you to add trust inside to use unlocked device frequently by avoiding repeated Login.

Google now comes up with the new Android lollipop smartphone security feature so silently which is known as On Body Detection. Here when your smartphone device attached to you, it’ll remain unlocked and when you stay away from the device it’ll locked automatically.

Android On Body Detection feature is added to the Smart Lock section of the Smartphone.

Android On Body Detection has the other added features including Trusted devices, Trusted Places, Trusted Face. You can add the trust in all that and let you can use device unlocked in your specified trusted selections.

Google itself found the problem with this new feature, While passing the device to the another person when on body detection activated will not re-lock the device and person can access everything while its on his or her body. But hopefully it’ll be fixed soon.

Just unlock once and your device stay unlocked until you left hold to the device.
Examples includes –
Holding device in your hand
Carrying device in handbag or pocket

Follow how to Activate the feature by viewing the Screenshot Above.

Android Lollipop On Body Detection Security feature rolled out through the official Google Android Play services and that should hit all the smartphone which carries the Lollipop older or newer version. How do you rate the Advanced Security feature by Google, Let us know your thoughts on the same.