King’s developer team working hard to make the Games with Puzzle. Pet Rescue Saga & Farm Heroes Saga are also the two most popular game. Recently King also  launched the Candy Crush Soda Saga as a sequel of the Candy crush saga for iOS and Android versions, and game itself got massive hits after the official release, tons of peoples downloaded the and started playing game with Soda crush. Candy crush Saga is the Game in which players enjoys the move by mixing the adjacent candies. 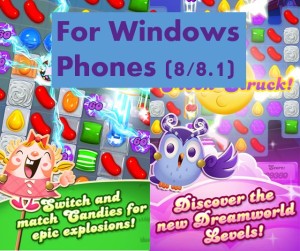 Candy Crush Saga’s popularity in both Android and iOS platforms inspired the King Team to launch the Windows Phone version of Saga. Officially its released and available on Windows Official stores to Download for Free. Tons of peoples downloaded the Application to their windows mobile and reviewed it as the Best in windows mobile phone. Application is of size 59 MB and works perfectly in Windows Phone 8 and 8.1 and also supports the various versions.

Download in your Windows Smart mobile and mix the candies. Solve the Puzzle in Delicious and testy environment.