Google’s Popular web email based service is now blocked in china. China’s great firewall now in action to block the email web access. People can still use the gmail through Virtual Private Network (VPN) in china but web direct access to the Gmail has been blocked. Google search and maps already banned in the china for the security reasons. Chinese authorities blocked the access to the Google Hangouts, Google sites, Google drive, Google +, Google calendar as well.

People previously used to download the Gmail over the IMAP and POP protocol using the popular apps like Microsoft outlook and Apple iPhone’s Mail client but it seems authorities  now had blocked those servers as well by China’s Great Firewall.

Google checked the Transparency report about the Traffic from china and found the massive drops of gmail traffic from china as mentioned in the snapshot below. This users drop out occurred on the 26th December 2014. Google spokesperson for Asia said “we’ve checked and there’s nothing wrong on our end.” 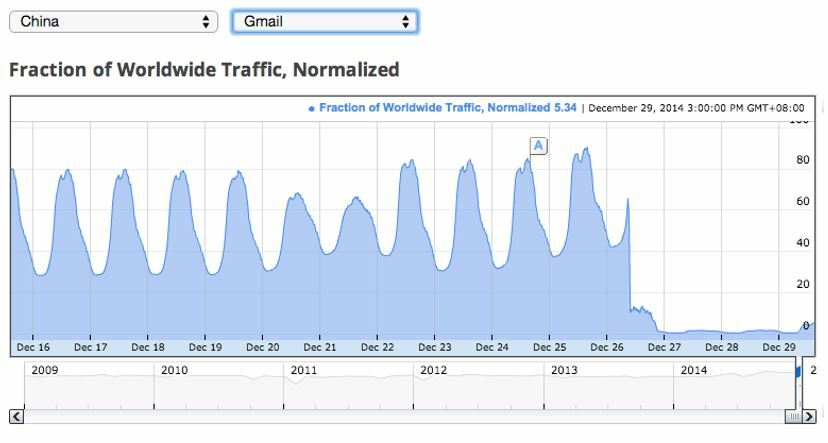 Chinese Foreign Ministry spokeswoman Hua Chunying said that she had no knowledge about the gmail disappearing. China has the transparent and supportive attitude towards the foreign investors and providing the good environment for the Investors, she added.

So it would become difficult for china people to stay connected online and work online without the popular and user friendly Google services.