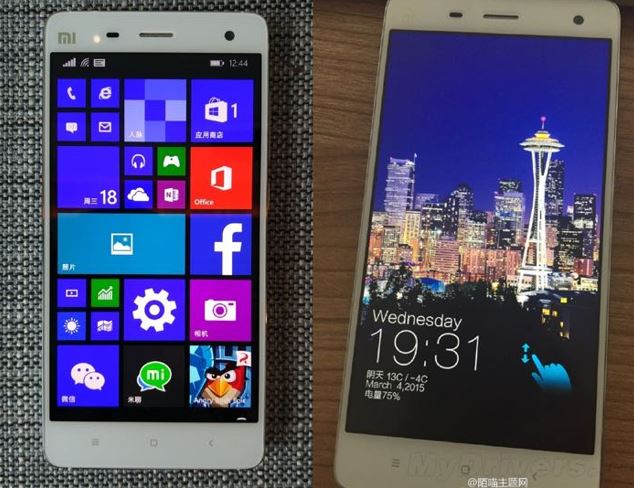 Microsoft Operating system provider announced that they would be releasing the Windows 10 ROM for android devices and Microsoft added that they partnered with the Chinese mobile smartphone giant and excited to launch the Xiaomi Mi4 smartphone device with Windows 10 support. Xiaomi is the fastest growing company and spreaded the business all over the globe by its unique smartphone design and look.

Xiaomi targeted the global market for its mobile business and users loved the devices as its been available at the affordable rate and advanced features and tech specifications. Microsoft announced that Xiaomi Mi4 smartphone users would be able to try windows 10 on their handset and we have pictures of device running Microsoft operating system.

A select group of Xiaomi Mi4 Power user will be invited to test the windows 10 and contribute for the future release. This power user will have opportunity to download the Windows 10 technical preview for installing and Providing the feedback to the Microsoft. Microsoft about to release the Windows 10 ROM for Xiaomi Android smartphones and it was also rumored that Microsoft may release operating system for ZTE smartphones.

Xiaomi is one of the top Chinese mobile distributor in the Globe and as there are lot more fans of its smartphones, Microsoft excited to roll out the Microsoft Windows 10 ROM for the Xiaomi Android devices.

Microsoft’s main target is to offer the Windows operating system to the Maximum mobile devices to give advanced and smoother mobile platform experience by offering the ROM for Android devices.